Radisson Blu , the conversion of an 1852 courthouse into a 4-star hotel *

The conversion of this courthouse required a complete re-imagination of the atmosphere in order to transform this austere building into a welcoming and attractive place, in synergy with its city.  The project was partly entrusted to Jean-Philippe Nuel together with the manufacturers Vitra, Ligne Roset, Mermet, iGuzzini, Artemide, Etnobel, Simmons, and Le Deun Luminaires.  The metamorphosis was achieved through the interior decoration; the bedrooms each have their own characters; the wood panelling in the restaurant, the former assize court, has been re-worked to give it a more contemporary appearance; and colourful sofas restructure the former antechamber which has become the reception area and a place to relax.

Turning from intimidation to benevolence: such is the antithetical destiny of the Nantes courthouse, a former place of judgment that has today become an atypical 4-star hotel.  In 1842, the Loire-Inférieure Council decided to group the courthouse, the prison and the gendarmerie together in a more central neighbourhood of the city.  Ten years later, the local architects, Saint-Félix Seheult and Joseph-Fleury Chenantais, delivered a neoclassical building, the main façade of which displays in its centre a majestic pediment in relief supported by four double columns.

A programme fulfilling a need

Until 2000, the cases succeeded one another - including the proceedings between Aristide Briand and Leon Daudet, and the Cayenne rebels’ trial - before the judicial staff left the courthouse to move into the building designed by Jean Nouvel, on the Ile de Nantes. Four years later, the Ministry of Justice gave it back to the Loire-Atlantique Council which decided, after various competitions for definition contracts, to convert it into a 4-star hotel, as the city was in need of luxury establishments.  The project was partly entrusted to Jean-Philippe Nuel together with the manufacturers Vitra, Ligne Roset, Mermet, iGuzzini, Artemide, Etnobel, Simmons, and Le Deun Luminaires.

Even if the general layout was relatively simple to transform, with façades opening onto the plaza and the adjoining square which made it easy to light most of the bedrooms, it was nevertheless essential to re-imagine the atmosphere, so as to transform this austere building into a welcoming and attractive place, in synergy with its city.
The access was first radically altered with the creation of a forecourt and a flat landing breaking the great staircase in mid-flight. The original half-windows thus became bays that can be accessed from the street, the wall behind the pillars at the top of the great staircase disappeared, and the tympanum was removed.

A project with a hundred and sixty craftsmen

Even if the building is not a listed historic monument, the renovation plan was supervised by the Conservation Régionale des Monuments Historiques. Particular care was taken with the parts in need of restoration and there were no fewer than one hundred and sixty specialised craftsmen, the “compagnons du devoir” - roofers, carpenters, masons or stonecutters - who worked on the roof, the glass ceiling and the façade.

Furniture which structures the space

The metamorphosis was also achieved through interior decoration: the bedrooms, with their forty different layouts, each have their own characters and their atypical windows which bring the place’s former function to mind.  In the assize court, transformed into a restaurant, the wood panelling and the ceiling have been re-worked to give a more contemporary aspect to the whole.  Vast grouped areas, created with sets of colourful sofas which structure the space, harmoniously punctuate the former antechamber which has become the reception area … and a place to relax.  Destiny decidedly makes many nods to the past. 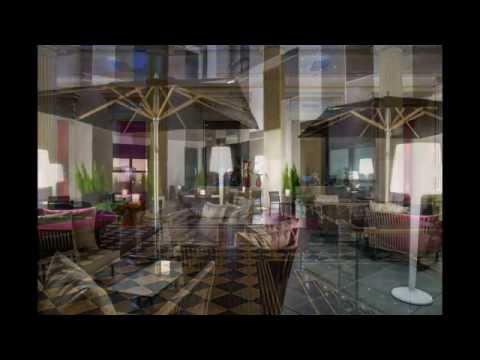 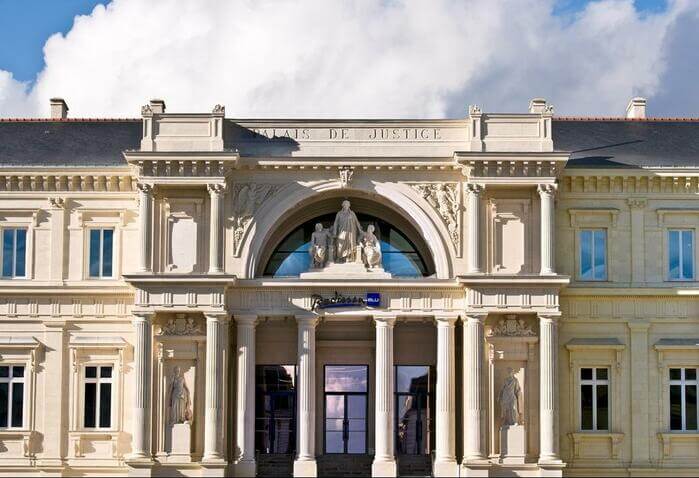 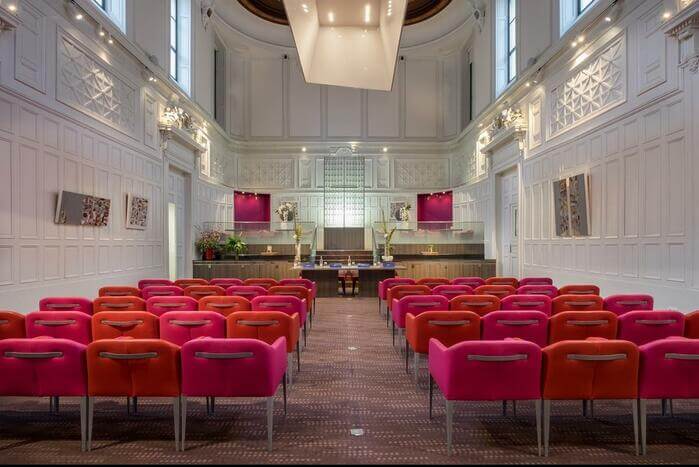 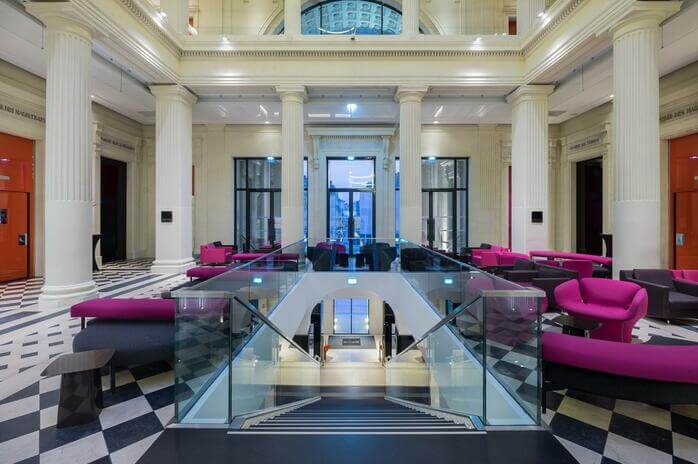 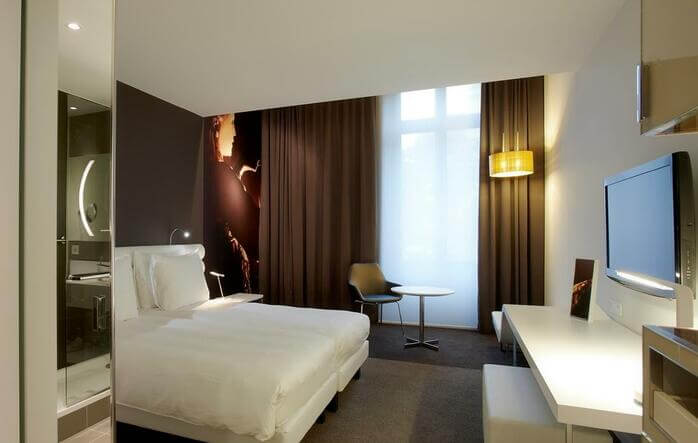